Don’t worry if you are following my “Let’s Write a Novel” series of posts. I will be writing that on Friday – Outlining Your Novel. Enjoy the prompt today 🙂 Thanks for visiting as usual!

In my land, everyone is born with a particular birthmark. It signifies what job you will have when you are ‘of age’. As for me, well… my parents were poor, so they believed that I would inherit one of their jobs. My father and mother were both born with the birthmarks of laborers. My father, a farmer, and my mother, a seamstress to the wealthy. They prayed to the gods that I was able to make a life for myself. And when I was born, they searched my entire body. There was no birthmark.

They brought me to the temples and the priests searched my spirit, but they were just as concerned. It wasn’t until the town’s Witch Doctor searched my energy that I discovered my career, an oracle. My birthmark was, in fact, the lack of one… it was known as ‘the clean one.’

There hadn’t been an oracle in eons. Someone who was able to see into one’s future was beyond rare. However, I would be forced to live in seclusion, let go of every possession, and remain close to nature. In order to see clearly, I would have to be free of earthly tethers. My home must be near all five elements; Earth, Air, Fire, Water, and the Divine. I took the position with grace and was separated from my family in my tenth year.

Because the carrier ravens were sent all around the land telling of my birth, my first few years in seclusion was spent with patrons. They would bring offerings of food in hopes of good fortune. One day, a man who called himself “The Rodent” came for a reading.

“What is your career?” I asked.

“Promise that you will never tell another,” he looked around nervously. “I’m not even sure how ethical it is for me to see an oracle.”

“I suppose so. I am a thief… Will I come into a great fortune? And if so, where will I find it?”

My duty was bound to my occupation, but I also was not sure how I felt about speaking the future of this man. But I also could not lie. So, I took a deep breath and centered myself, allowing the elements to fill my being. Images flashed before my eyes, The Rodent’s past and present. And then, his future.

I paused. I had to be honest. My vows bound me by speaking the entire truth. “You will take a fortune in the King’s Castle. More gold and jewels than you can carry. I also saw your new home, a wife, and a child. But…”

“What?” The Rodent swallowed hard. “What did you see?”

“I also saw your death,” I cleared my throat. “It will come swiftly… very soon after you reap your fortune.”

The Thief stood up shaking his head. “No. No. No. This can’t be. I am too young to die. What if I don’t seek out the King’s treasures?”

“Death will find you either way. It is fixed and unrelated to your fortune.”

I was only in my fifteenth year when I met The Rodent. It had been the first time I foretold someone’s untimely death. The worst part is, I knew it wouldn’t be the last. 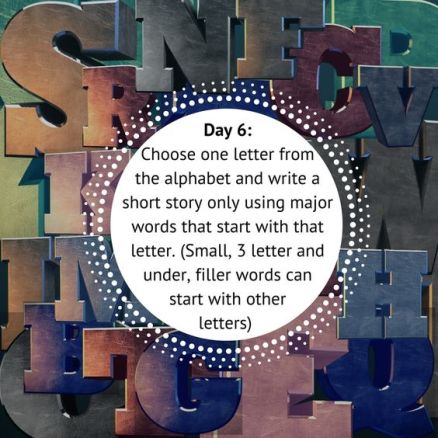 Let’s Start the Week off Right! 😁

Dutifully, do not delay.

And the damsels, dimpled, delighted do the deeds so dutifully.

Death, doom, and danger for the Darkness.

The daughters dance in death and Darkness’s delight till dawn.

Whew! That was difficult 🙂 Do you want a challenge? Try the one above too! 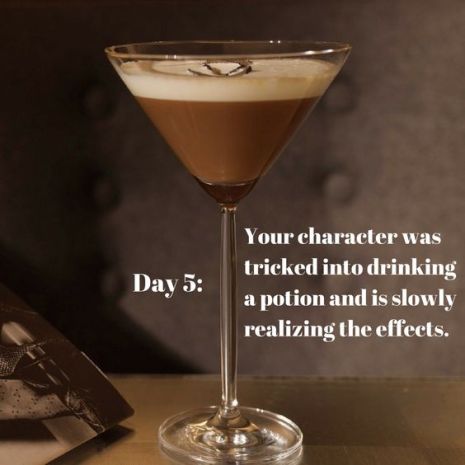 Please don’t forget to Follow My Blog for the newest writing prompts!

“How nice of him to buy me a drink,” I thought. Little did I realize, it wasn’t an alcoholic beverage, but a potion.

“Are you feeling okay?” my friend asked. He must have seen my brow furrow when my vision began to shift. It didn’t become hazy. No, it was much more unusual than that.

I remember the mysterious man walking up to me at the bar and start talking to me about the supernatural. Well, I am a huge nerd and I love fantasy, so when he asked me “If you could pick any superpower, what would it be?” I thought he was just joking, but he sounded so serious… That was what made my stomach turn. Until I thought about it, something was very unusual about him. Not the creepy, kidnap-py type guy. It’s something that I can’t explain.

“Telekinesis and Telepathy, for sure.” I wasn’t drunk at that point. My friend, James, was talking to a few of his friends who had met up with us. But I only had a few drinks before I felt the man tap me on the shoulder. A ton of questions popped up in my head. Is he hitting on me? Do I know him? What’s different about him? Something is off.

After I finished the drink, I started feeling funny. My arms were warm and everything I could see was much brighter than before. Then, it dawned on me. The man did not get my drink from the bar. Or a waitress, for that matter. I started to panic. James could see me hyperventilating.

All I could say before I went unconscious was, “The drink.”

It was hours later when I woke up in the hospital ER. James was there with his friend Aaron. They were both freaking out and pacing in my room. Then I started to freak out when I opened my eyes. I could hear their voices, but their mouths weren’t moving.

“I hope she’s okay,” my best friend was speaking in my head. “If someone drugged her I swear to God I’m going to kill them. I’ll find out who they are and slit their throat.”

They noticed I had opened my eyes and rushed over to the side of the bed. They were asking questions, but I could hear each one of their voices twice. Once, when their mouth was forming the words, but I could hear the question before they said it.

“Some guy gave me a drink and I started to feel weird. Still do…”

James stood up and punched the wall, demanding to know what the man’s name was. I told him I didn’t know. He wasn’t satisfied with the answer and started to badger me. Aaron tried calming him down. The thirtieth time he asked “Who was it?” I lost my composure.

“I. don’t. know.” I yelled. But it wasn’t the volume of my voice that scared the crap out of us. No. When my anger was rising, I felt powerful. And when I let it out, the chairs in the room, my IV, and the board at my feet exploded across the room, missing Aaron by inches.

“What the hell?” James looked around. Aaron was on the floor in shock. “How did you do that?”

“I didn’t…” I lifted my hand and pointed to the chair. It started to lift back on it’s feet. “Oh my God… This can’t be happening.”

I reached for my purse and it floated into my lap. My heart was racing so fast that the machine’s alarm started going off. A nurse walked into the room and pressed a few buttons while I dug around in my bag. My hand brushed against something that I didn’t remember putting in there, a folded up piece of paper. I pulled it out as the nurse left. James and Aaron’s eyes widened.

“This isn’t mine,” I said, but I opened it anyway. The handwriting I didn’t recognize.

You may not know me, but I have been watching you. I have chosen to bestow a gift. Something that you must use for good… for the benefit of humanity. The potion you were given allowed a part of your brain to unlock. Your desired ability is now a reality. But I did not do this for you. There are others that I have changed around the globe and none have disappointed me. Do not be the first.

I will be checking up on you.” 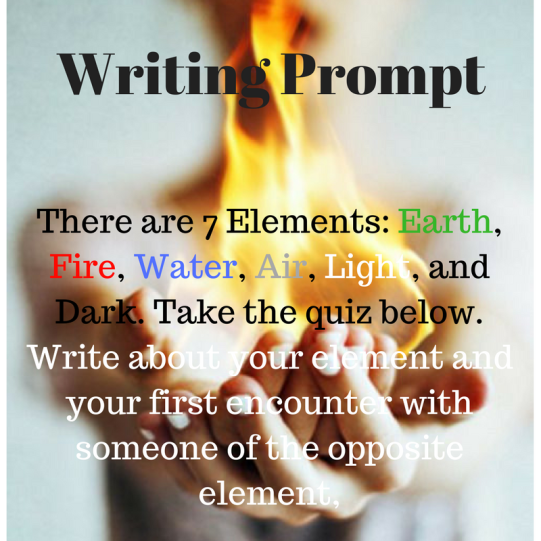 Writer’s Block. The time when your imaginary friends refuse to talk to you. We all go through it, even famous authors. No one is immune to it’s evil grasp! However, you can unsheathe your sword and fight against Writer’s Block once you know what you’re up against.

There are a few places that Writer’s Block comes from, but every reason is psychological and it stems from fear. Fear of being judged, fear of failure, fear of lack of originality… I could go on. It’s true, writing a novel (or other piece of literature) and publishing it is like standing in the middle of New York City naked. Your work of art has only seen your eyes up until that moment. And really, it is your baby. Every character, every scene is special and you love every word in it’s perfect place. But you, like every other author, knows that there will always be critics. Always. No matter what you write about, there will always be people who hate it.

But so what? Why should you care?

Don’t worry, future author, you can and you will get over Writer’s Block! Search for inspiration and you will find it. On the other hand, if you search for reasons to quit, you will find that as well. But please don’t! Me and the rest of the writing community want to read what you finished! Keep going and do what works for you!!! 🙂

Here are 2 Prompts for today! I spent a while trying to brainstorm the first one from Pelsky Sisters website, but I cannot think of anything! Drawing a blank! Let me know what you come up with 🙂 Instead, I’ve posted the first paragraph of my upcoming novel, Purpose, below!

Dim, hazy lanterns lined the steel walls of the massive, single-room building. Smoke billowed and stuck to its high ceilings. The source, small fires underneath boiling pots of food. At the door, a line of people waited to be served their second and final meal of the day. Both the cooks and their hungry patrons were clad in mismatched ragged clothing. Dust and mud-caked figures carrying small knives and blades, grabbed their stomachs and licked their lips as they neared their dinner. These people, who called themselves Rovers, were farmers who worked tirelessly through the day. Next to the queue stood a bar. Glass bottles of different shapes and sizes brimming with clear alcohol, lined the warped wood. A few of them laughed loudly in a slurred, drunken stupor. Their kin paid them no attention. Merchants bartered with one another for clothing and supplies around the edge of the room. It was hard to believe that this was once a large, boisterous town. Today, the population filled only half of the hall. Enslavement, murder, and famine had plagued the colony for over a decade. Now, everyone spent their days living in fear of when the Gangs would strike next.