Here are 2 Prompts for today! I spent a while trying to brainstorm the first one from Pelsky Sisters website, but I cannot think of anything! Drawing a blank! Let me know what you come up with 🙂 Instead, I’ve posted the first paragraph of my upcoming novel, Purpose, below! 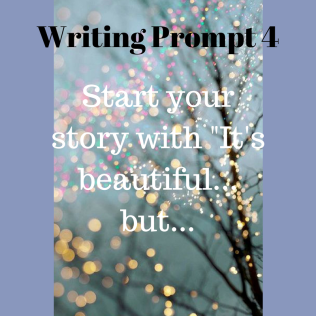 Dim, hazy lanterns lined the steel walls of the massive, single-room building. Smoke billowed and stuck to its high ceilings. The source, small fires underneath boiling pots of food. At the door, a line of people waited to be served their second and final meal of the day. Both the cooks and their hungry patrons were clad in mismatched ragged clothing. Dust and mud-caked figures carrying small knives and blades, grabbed their stomachs and licked their lips as they neared their dinner. These people, who called themselves Rovers, were farmers who worked tirelessly through the day. Next to the queue stood a bar. Glass bottles of different shapes and sizes brimming with clear alcohol, lined the warped wood. A few of them laughed loudly in a slurred, drunken stupor. Their kin paid them no attention. Merchants bartered with one another for clothing and supplies around the edge of the room. It was hard to believe that this was once a large, boisterous town. Today, the population filled only half of the hall. Enslavement, murder, and famine had plagued the colony for over a decade. Now, everyone spent their days living in fear of when the Gangs would strike next.